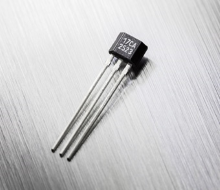 The MLX90217 is a continuously adapting digital gear tooth sensor designed for use in automotive camshaft sensing as well as other speed sensing applications.
It is designed to be used with a back bias magnet to sense the rotating speed (incremental position) of a ferrous toothwheel. The bias magnet can be from 50 to 400 mT.
The device has an open-drain output (low-side) which is short circuit protected.
The MLX90217 uses a single Hall plate (mono-cell) which makes it insensitive to any mounting tolerances.
The MLX90217 logic tracks the flux density, recognizes any increase or decrease, and continuously adapts the switching thresholds (Bop/Brp) based on the detected peaks (minimum or maximum). The output turns on (Bop) after the flux has reached its maximum value and decreased by an amount equal to the hysteresis. Similarly the output turns off (Bop) after the flux has reached its minimum value and increased by an amount equal to the hysteresis.